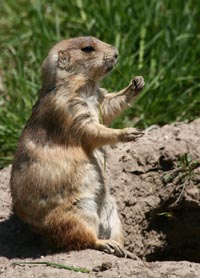 The largest prairie dog town ever recorded stretched for 25,096 square miles under the Texas prairie. Nearly 400 million prairie dogs lived in this town.
Conservation Status
Listed as Least Concern. They are widespread with an estimated population to be in the millions.

Learn more about this animal.